So, I got this in my email today. 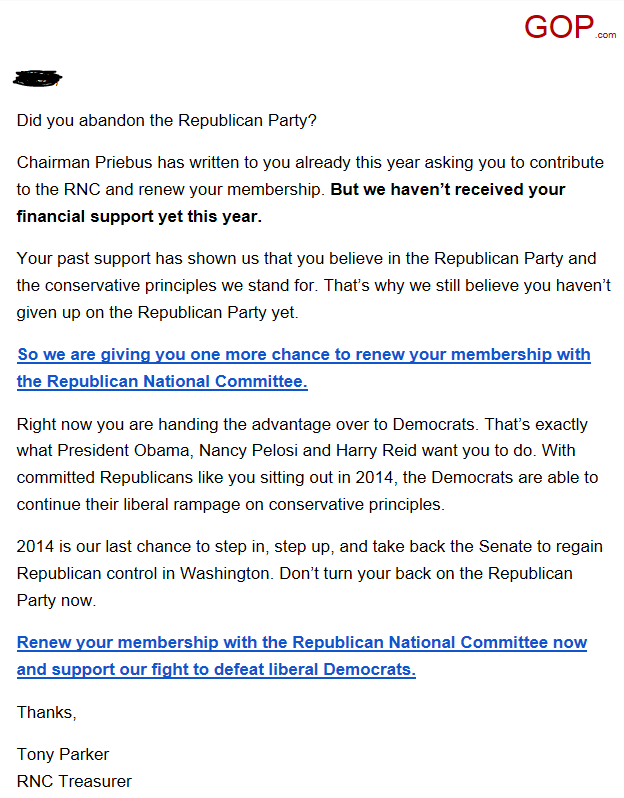 Now, normally I get these emails and I just ignore them.  If I decide I want to give money, I will.  I don't give money to the RNC for lots of reasons, but those have been *my* reasons and I've kept them to myself.  However, accusing me of "abandoning the Republican Party" is a bridge too far.

You know what Mr. RNC Treasurer Tony Parker?  You asked for it, you're getting it.

When I was a kid in the 80s, I believed, with the innocence of youth, that the Republican Party was a conservative party.  How could I not?  Ronald Reagan was president.  My Conservative (yes: Christian) parents loved him.  My father (in banking) never bought into the idea that the S&L crash was due to too little government.  The Republicans had reduced taxes, and, if they had also increased spending, at least it was spending on conservative things, right?

Then came the 90s.  I got a little older.  I was still a kid, still innocent, but I was pretty sure that raising taxes wasn't the conservative option, whatever George HW Bush had said.  And I'd been taught lying was bad (Read my lips).  Both George HW Bush and Bob Dole were certainly better than Bill Clinton- a draft-dodging womanizer (at best)- who never met a government program he didn't like, but I was beginning to see that things weren't so clear as I'd believed when I was (yet) younger.

My first Presidential election was in 2000.  I enthusiastically voted for George W Bush.  He'd been my governor, I knew I liked how Texas was running, I figured we'd be back to conservatism after 8 years in the Prog/Commie desert.  And things started out well.  The crash of 2000 happened (that no one remembers), and President Bush responded as he should have- by cutting taxes and putting money back in the hands of the citizenry.  If he also gave some of my money to people who already didn't pay taxes... well, the economy was in a slump.

But George Bush was never Conservative.  Maybe "conservativist" might be a better term, but really he was always a big government progressive who happened to believe in slightly smaller government than the Democrats.  The Patriot Act passed at his insistence.  The Department of Homeland Security quickly started stepping on the Constitution.  No Child Left Behind and Medicare Part D both passed and were signed by President Bush.

For 2001, and the immediate aftermath, I was still young enough to believe that "as long as people we can trust" were in charge, the law giving them the power to trample on the Constitution would not be abused.  I have since come to realize the error in that thinking was flawed.  For one thing, people we trust will not always be in charge.  For another, you should never trust government in the first place.

I've grown wiser since then.  It's been nearly 13 years since Muslim Terrorists flew airplanes full of our neighbors, brothers, sisters, parents, and children into three buildings -and attempted another- in the largest single attack on US Soil in history.

And what does the RNC Stand for now?
1- They stand for big government.  I have never heard a Republican on the national stage- except for Presidential debates, which don't count (words are cheap) call for an end to the grossly unconstitutional government overreach which exists.  Find me the Constitutional Authority for the EPA, DoE (either one), No Child Left Behind, Medicaid, Medicare, Social Security, or any other big government program.  The Constitution is short, I'll wait.

Republicans don't want to shrink government.  They don't want it out of our lives as much as possible.  They want it under their control.

2- They stand for amnesty.  Over and over Republicans have tried to force amnesty (under the Orwellian term "comprehensive immigration reform") down the nation's throat.  We don't want it.  A nation which cannot or will not control its borders is not a nation.

And what do Republicans stand against?

2- They stand against border control and sane immigration policy.  See above.

3- Most importantly: They stand against their own constituents.  Over and over since 2010, engaged Republican voters at a grass-roots level have shown their displeasure with the current status quo by selecting actual conservative candidates to run against incumbents.  Some of those were... ill advised.  But some were not.  Some were men and women quite capable of winning their elections.  How did the RNC respond?

When they engaged in the primary at all, they always did so on the side of the incumbent.  I suppose that's fair enough.  But what did they do *after* the primary?  Well, when the incumbent won, they proceeded to rub Conservatives' noses in the fact that their candidate lost, and then immediately called for "party unity."  When the incumbent lost, they gave words of faint praise, and then mostly did nothing.  That was bad enough.

But then came the Mississippi run-off between Thad Cochrain and Chris McDaniel.  In that race, the Republican National Committee shat upon Conservative Republicans from a great height.  When Republican Leadership bought ads smearing Chris McDaniel as a racist homophobe- the very same deceitful attacks Democrats use- they were saying to Conservatives across the nation: "We don't want you.  We don't value you.  We don't think we need you to win."

But the RNC will never see another dime from me.  And if the candidates are not as conservative as I am, they will not get my vote.  If they're too Progressive, I'll vote Democrat.

No more.  You have pushed me too far, and you will push me no further.

Burn it down.
Scatter the stones.
Salt the earth where it stood.

Posted by Dedicated Tenther at 08:04 No comments: