The young-ish married couples at our church have long had a "babysitting co-op."  If your church doesn't have one, and you have kids, consider starting one.  It's awesome.  Basically three times a year we end up babysitting all the kids of the other parents in the co-op (about 10 this year, including our own).  In return, we get nights out roughly every other week.

Did I mention it's awesome?

So, last Friday was the first co-op night of the new year, and my wife and I decided to make it special.  So what did we do?  The most romantic thing in the world.  We sent hot lead at high velocity through paper targets.

We used my Springfield XD9 (I've blogged about it here before), and she had fun.  How'd she do?  Well, see for yourself: 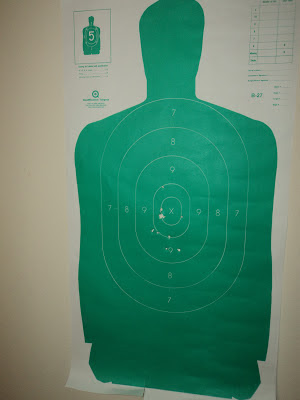 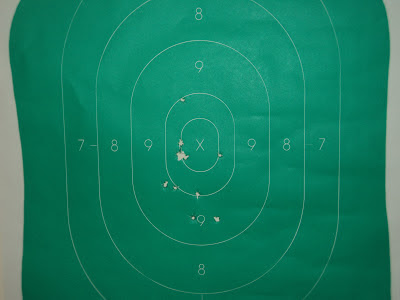 Those are both pictures she took of her first target.  She was proud enough that she insisted on keeping the paper itself, and then taped it to our wall to take these pictures.

The shots in the 10 and X rings were after she had a better feel for the pistol.  The ones mostly in the 9 ring were her fist several shots.

One major downside to this date, however.  I think I'm going to have to buy her a handgun (the XD is just a little too big for her hands), and one just simply isn't in the budget right now.